Trending
You are at:Home»News»Submorphics Makes SGN:LTD Debut
By Colin Steven on September 1, 2014 News

It’s a fact not known to many on the outside – in a region saturated with glitzy clubs, massive commercial raves, and the ever-present burden of “EDM culture” – San Francisco, CA is holding it down as a focal point for stateside drum & bass.

2013 saw a number of producers, DJs, and label owners relocate to the SF Bay Area, invigorating a local scene which was already home to some of the United States’ most sought-after drum & bass talent. One such producer came in the form of Greg Axelrad, aka Submorphics, a Chicago transplant who today became the first American to release on Shogun Audio’s coveted sister label SGN:LTD.

We meet at his studio in San Francisco’s Tenderloin district. Sitting at his desk, he speaks with the calm confidence of a veteran. It’s a demeanor well-earned; Greg has spent the better part of 10 years on the hustle, writing tunes, playing shows (in the U.S. and abroad), and forming alliances with key players in drum & bass.

Making friends has never seemed to be a problem; Greg’s music was embraced early on by guys like Atlantic Connection, Ant TC1 and Artificial Intelligence, while he was still grinding away in a bedroom studio in Michigan. Atlantic Connection played a particularly important role in those early days.

“Around 2005 I started networking like a motherfucker. There was Basic Operations [Atlantic Connection], or so they were called at the time… he was sending my shit to labels. It took me about two years before anyone even said anything to me.”

Oh, how things have changed. In truth, the entire landscape has shifted for drum & bass producers on this side of the pond. Greg reflects upon being a drum & bass producer in the Midwest during that time; “It was all internet. I met nobody. I lived in Michigan at the time, when the scene was tiny. I was in complete isolation.”

Over the following several years, Greg would seize a number of key opportunities including a release on Good Looking and an exclusive signing to Atlantic Connection’s Westbay imprint. Somewhat unexpectedly, a big break came in the form of Camo & Krooked’s 2012 album Between the Lines.

Greg recalls being approached by Camo in mid-December 2011. “He hit me up and said, ‘We need a remix, but we only have two weeks to finish the album. Can you do it in two weeks?’ … I called my dad and said ‘I’m not coming home for Christmas.'” The rest, as they say, is history. 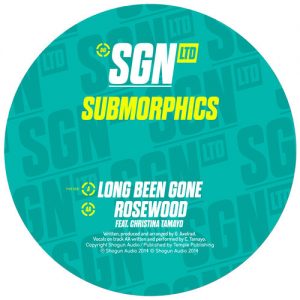 Catching the eye of V Recordings boss Bryan Gee, Submorphics soon signed two tracks to Liquid V – ‘Burning Love’ and ‘Hurt So Bad’. A solo EP on Liquid V followed, featuring the vocal talents of US-natives T.R.A.C. and Christina Tamayo. Before he knew it, Submorphics was being remixed by the likes of Calibre and Lenzman. Meanwhile, Friction gets on the Submorphics hype with regular plays on Radio 1 before signing two tunes flat out. Not a bad year.

Speaking with Greg about the trajectory of his music over the last year, he’s especially eager to big up Christina Tamayo – the Chicago-based vocalist with whom, perhaps more than anyone else, Greg has found both a collaborator and a friend. Christina features on the new SGN:LTD release (‘Rosewood’) making her the first female American vocalist to appear on Shogun Audio.

A partnership reaching back to 2009, the two found each other by chance outside of the often-insular music business sphere. Greg reminisces on meeting Christina – “She was my friend, and I didn’t even know she sang at all. One day she’s over at my house while I’m working on a tune with Mutt and she’s like, ‘Do you want me to try and sing over this?’ And I’m like, ‘I dunno, do you sing?'” Given the critical success of the two artists since then, it’s a humorous story. However, this was undoubtedly a key moment in both artists’ careers. “Mellow. Eerie… It just sounded perfect.”

Now with support pouring in from across the scene, Greg’s SGN:LTD single – Long Been Gone / Rosewood – is positioned to make a big impact. ‘Long Been Gone’ primes your ears with a signature Submorphics vocal, a soulful sample teeming atmospheric echoes, before delivering a calculated dance of rich pads and strings, warm sub bass, and a crisp rolling break. Classic Submorphics vibes.

Christina does some of her best work on ‘Rosewood’, leaving listeners with a palpable sense of longing – a resigned, lonely sadness – during the outset before truly going in for the chorus where she perhaps shines the most. Christina Tamayo, who had practically zero exposure prior to her Submorphics collaborations, is of those rare vocalists who doesn’t have to belt it out diva-style to get her message across. Her voice, after all, contains enough melancholy for two. Add Greg’s warm production to the equation and it’s a done deal. The proof is in the pudding.

It’s been a long process, but Submorphics’ story seems to be far from over. With more on the way, the Greg is poised to make some big moves not only for himself, but for stateside drum & bass as a whole. With his pre-existing résumé in drum & bass, Submorphics’ SGN:LTD release is hardly an introduction. So, we’ll leave it at this: watch out. There’s a lot more coming.