Trending
You are at:Home»Features»Yazzus: why footwork jungle is making a comeback
By Rave Report on November 28, 2019 Features

Yazzus is part of the 6 Figure Gang: one of the most inspiring new collectives in UK bass today. Together with Sherelle, L U C Y, Fauzia, Jossy Mitsu and Dobby, their chemistry and unpredictable selection from 130 BPM and up gets the crowd going nuts every time. All of which has been accelerated by their turn-up residency on Rinse FM and Boiler Room. One of the most distinctive elements of their sound is the synthesis of footwork and jungle. And although the sub-genre has been around a few years, with a big thanks to these selectas it’s making a comeback in an even newer form. So I spoke to Yazzus, who’s been championing footwork jungle with her own original spin, to find out why.

Hey Yazzus! So before we dig into footwork jungle… can I get a quick background about you and how you got into the sound?
Hey! Sure, so I’ve been DJing for five years. Producing for just under four. As well as doing a lot of 140 stuff, I was into club music, like Jersey Club, Ballroom, Voguing. And I branched out. Footwork was one of the first genres I was producing. I really like programming the drum patterns. It’s iconic for the kicks, the patterns. Everyone knows when it’s a footwork tune.

For those who don’t know can you explain what footwork is in a nutshell?
Footwork is basically sped up house at 160 BPM. But with a lot more interesting, intricate kicks and drum patterns. The name comes from the dance, back in the late 80s/early 90s. Especially in Chicago. They sped it up & people would do insane dance moves. Footwork has a lot of chopped up vocal samples and hip hop styles. It’s very versatile.

There are pioneers like DJ Rashad (RIP) and collectives like Teklife. But it’s cool because now it’s spread over here. I’ve been going to footwork parties in London for a while now. Mainly in basement clubs like Alibi in Dalston, very small and niche. But that’s changing now, partly because of Sherelle’s Boiler Rooms, and how much attention she’s brought to it! Then obviously hanging out with 160 queens like Sherelle and Fauzia meant it made sense for me to get back into it…

For real! How did 6 Figure come about? You guys are killing it right now.
Thank you! We only formed one year ago. And that’s what makes everything we’ve done so special. We’re all really good mates and have known each other for a few years now. We’ve been in the same scene and played on each other’s sets and shows.

And then last year it was a weird fate. One night in Tottenham when Jossy was playing, all 6 of us happened to be there. We were all chatting shit like “omg we’re London sickest DJs!” And “there’s 6 of us – 6 Figure Gang wheey” haha. The next day in a group chat we were like, right. We’re actually gonna do it! But still kinda jokey.

But then month after month, we’ve been getting Rinse shows and Boiler Room tours. It’s been sick having all 6 of us doing something together, and so much more fun. It’s like a blessing to be working with your best mates. It doesn’t feel like work! 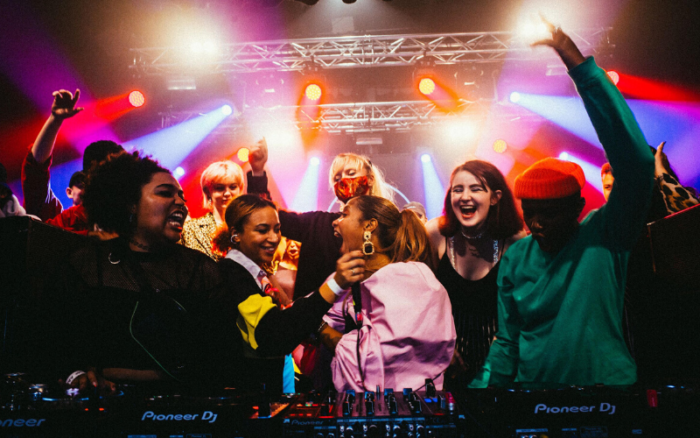 It is beautiful and you can really feel the chemistry between all of you. And although 6 Figure is unified by a love of 130 BPM and up, you definitely bring your own distinctive vibe…

Yeah, I bring the hardcore element to it! I’m fascinated with 90s rave culture. With my production, I like my beats, my breaks and intricate drum patterns. But I also love the melodies, synths and the stuff you can hum along to. Rave and hardcore have their own kind of fun random madness. That’s my kind of aesthetic.

But the fact I’m a producer as well is a really big part of my DJing. When I first started DJing I knew I wanted to produce, because the dream was to mix my stuff into other peoples stuff. And since then it’s amazing hearing other DJs play out my tunes.

Yes! On that tip, who do you rate at the moment?!

I want to big up one duo. They’re called PZG and Dubsknit based in Poland. They’ve got the perfect jungle/footwork/rave hybrid going on. They’ve got lots of rave compilations coming out and a ton of material sitting on Bandcamp. I love playing their music out.

I’ve also got my nod to the intelligent jungle movement. I love the melodic stuff. There’s so much of a story going on. You listen to any of LTJ Bukem’s tracks and ugh, it’s euphoria. Aha!!

Then there’s the Astrophonica crew like Fracture, Sam Binga, Om Unit. And there’s Coco Bryce. They’re all so supportive of 6 Figure and they’re mates of ours now. But in terms of production, yeah mind-blowing.

And obviously – my girls! Sherelle and L U C Y have their labels with some amazing stuff coming out. Fauzia is getting back into production so I’ve been helping her in the studio lately.

With artists like Fracture and Binga… they’ve been doing the footwork jungle thing for a few years now. So it’s exciting that you’re almost championing that sound into a new generation.

Exactly, with the new decade coming in, it’s interesting timing, isn’t it?! This year and next I think is the revival of footwork jungle. There are a lot more people that are into jungle again. Maybe it’s less the music, and more the atmosphere. There are people who don’t normally listen to jungle or anything 160, but people are drawn to the vibe and the energy. That’s how I DJ, purely off the energy and the vibe. It’s the feel of it.

One thing I love about the sub-genre is that each producer and DJ combines different elements of genres and samples and vocals in their own way. So it’s totally original.

I think the good thing about footwork jungle is that they’re both around 160bpm. So you can combine elements of footwork and elements of jungle and it makes total sense. A lot of producers are doing it, but it’s different every time. I think that’s why it feels really fresh and fun as well.

Yes! I love that with footwork you can bring in hip hop vocals and chop them up with jungle breaks and trap beats… it’s nuts!!

Innit yeah… taking elements from everything and anything! There are no rules anymore.

Speaking of which I wanted to hear more about your Deep Medi jungle & footwork remix pack. Because you’re doing footwork jungle remixes of deep dubstep classics, which is so sick! What’s the inspiration?

I really enjoy making remixes and wanted to release a whole bootleg pack. As I was going through all my favourite songs to remix a lot of them turned out to be Deep Medi bangers. So it made sense for me to do a pack for them and pay homage.

So I’ve got the Skream remix which is proper footwork, The Jack Sparrow one is footwork into jungle, and the other three are jungle. The Kahn one was the most difficult to do. Cos it’s heavier so I was thinking, how do I make it bang better for a 160 audience. So I put a hardcore spin on it. But I did that all those remixes very quickly as I was so excited about it

So when Sherelle played the Loefah – Disko Rekah remix in her Boiler Room, people were asking “what’s that remix” and I was like “what… my remix!?! I was so happy, especially as it was on a little self-release tip.

Trust me that remix pack is heavy! Final question then: footwork and jungle merges sounds native to London and Chicago. What do you think the culture of each city brings to the synthesis?

Ooh great question! Music and culture go hand in hand. They inspire each other constantly. In London, since immigration happened in the 1960s, as an example Caribbean communities brought ska, reggae and dub over here. It’s made the city a melting pot ever since. So we’re used to experiencing different sounds.

When you think of UK dubstep, garage and grime, it’s all been quite dark. I think London’s quite a dark city. Dark and edgy, aha. So in terms of any genre really, we put our spin on it.

With America I don’t know too much, but from my knowledge, it seems truer to the original footwork sound. Because it originated there, so it’s rooted in the extensive hip hop and house culture. It makes sense for footwork over there to sound even more housey or hip hoppy.

Have you seen other countries representing footwork jungle?

Yes! I’m hearing a lot of Eastern European collectives like Poland and Russia. It’s interesting to see how different cities interpret it. Technology has made such an impact on trends. As we look ahead to 2020 we can utilise more online communities like Bandcamp. The fanbase is great and the music’s top tier. A lot of it’s self-released.

The internet revolution has brought up a lot of revivals for sure. What upcoming releases/events/and radio we can look out for?
I wanna keep my releases under wraps. It involves three big labels. But I’m keeping it on the DL for now. Hehe.

But what you can look out for is L U C Y’s szns7n sessions on 7th December in Hoxton. Featuring myself, Dobby, L UC Y, Pinch, Jetsss and special guests. But yeah. Basically, 2020 is the 6 Figure world takeover!!

For real, it’s already happening and it’s totally deserved. You’re paving the way for a new generation of music. Big up yourself and all the 6 Figure Gang!