Trending
You are at:Home»Features»Decibella is the Rupture and AKO junglist you need to know
By Rave Report on January 28, 2020 Features

Sophia Rosa, AKA Decibella, has been mad about jungle, D&B, dubstep, garage and hardcore since way back when. She learned the ropes at Knowledge Mag as an intern at age 15, and has been raving, DJing and producing ever since. Then after sending over her demos to Mantra at an EQ50 producers workshop, she exploded onto the London scene with the support of AKO Beatz, Rupture and more. On top of that, she’s one of the most friendly and humble selectas in the game. Read on to get to know the absolute babe that is Decibella.

Hey Decibella! I heard you were an intern at Knowledge Mag back in the day, how did that come about?

I was 15 or 16 years old, and it was a 2 week work experience thing. My mates were going to work at their mum’s insurance companies, haha. At the time I had started going out raving and would buy Knowledge Mag every month – so I was like I’m gonna write to them and see if they will let me do it there. And they said yes… I was buzzing!

That’s easily the best school work experience I’ve heard of! What did you get up to while you were there?

I was creating stuff for the magazine…researching people, writing articles and reviewing music. I was also there when they were doing the cover shoot for the Ed Rush & Optical issue which I helped with. I’ve still got the mag!

I was so into drum & bass and going into an office where they’re wearing their own clothes and playing D&B and following their passion was very cool and really motivational at that young age. 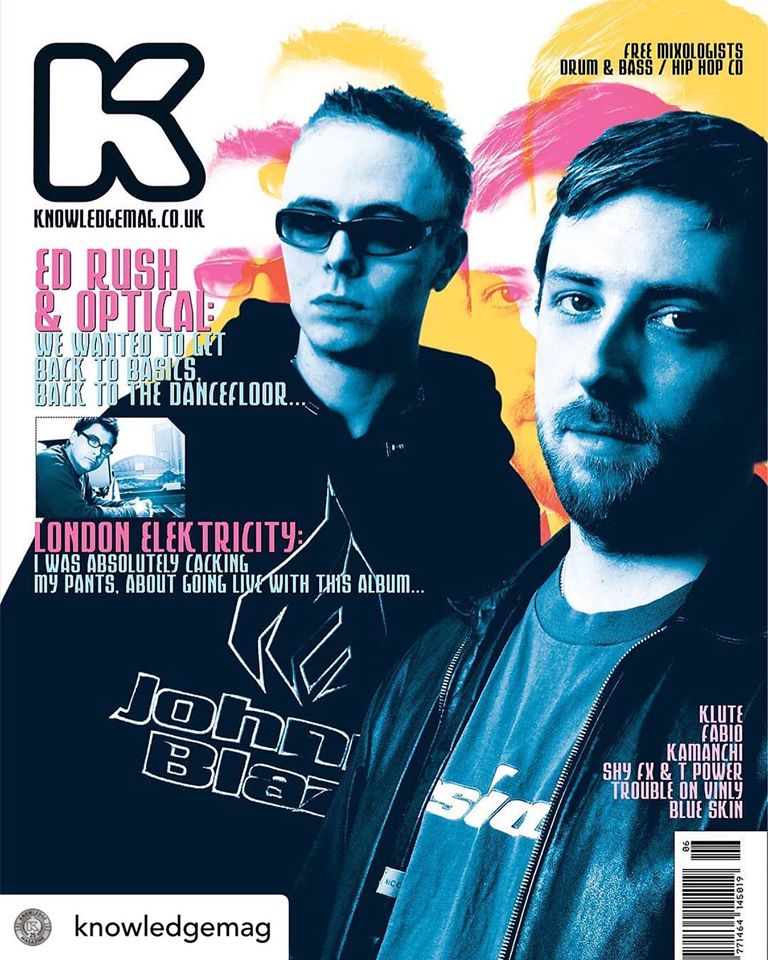 Sounds like it was a huge influence on you and your music. What else influenced you to get where you are today?

I just wanted to be closer to the music…to be a part of it. It didn’t cross my mind that I could be a DJ or producer at first, just because I hadn’t seen any women doing it. When I went to raves, all the artists and MCs were guys. So I thought writing about it was a way to be closer to it.

Then I came across a DJ Rap tape, which I connected to in a different way… in a more emotional way. So I was bigging up DJ Rap, saying “he’s my favourite DJ. He’s so sick”. But then I was corrected and was told Rap was a woman! That’s what really planted the seed in me to begin to dream about being a DJ and making music. Reading the All Crews book also opened me up to loads of new information about the music and the history, the artists and labels, and allowed me to connect all the dots. This was before the internet was like it is now! I loved that book. 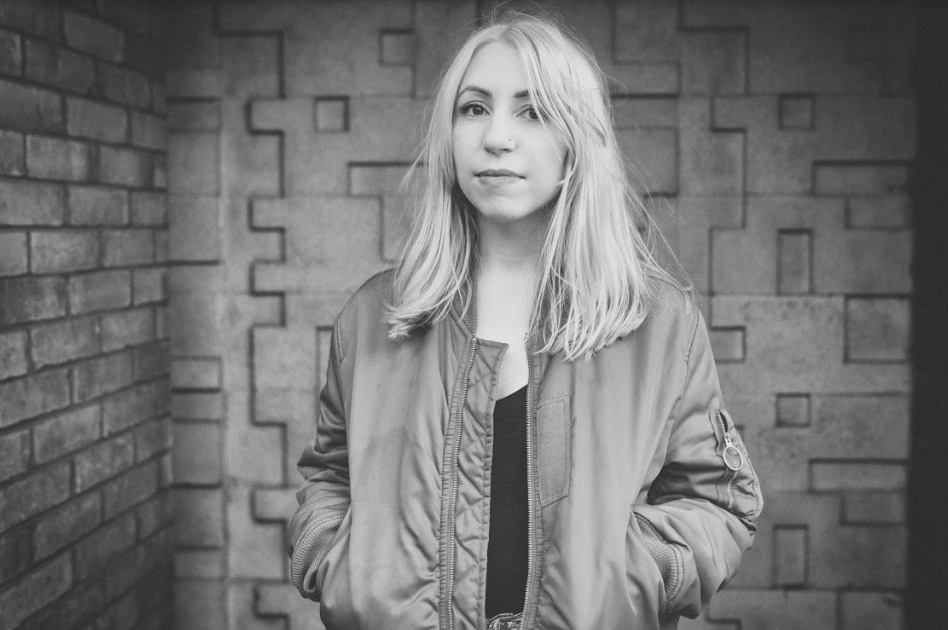 When I discovered the underground music scene in London it had a huge impact on me. I knew I’d found something special that was gonna change my life. It awakened a passion and joy in me I never knew I had. I fell in love with it, it seemed to give my life new meaning and purpose and direction. The music and my experiences of raving have given me beautiful moments of feeling connected to myself and my emotions and my spirit, and to people, and I just wanna share that, and maybe help create those moments of connection for others in some small way. It has given me so much I just wanna give it back with love.

And how old were you then?

Not long after the time I was doing work experience with Knowledge! It was when I was really getting into it – started to become a bit obsessive about it.

Haha yep, the obsession is real!! So maybe I’m just living under a rock, but you seem quite mysterious like you’ve exploded onto the scene. But you’ve been doing this jungle D&B thing for a while?

I’ve loved it for a long time, as a lover and a raver and a fan. I was going out DnB and Garage raves and listening to pirate radio from really young, like 14! Then bought decks when I was 21 and started buying vinyl. I was buying a lot of early dubstep at the time actually. Going to FWD and DMZ nights, I was really into that sound. Always buying old Jungle records though and listening to loads of old jungle and hardcore sets, I particularly loved that sound and felt so sad that I was too young and missed it. The early dubstep sound & movement reminded me of a bit of jungle. When I started learning to produce, I just naturally started making jungle, hardcore and garage. 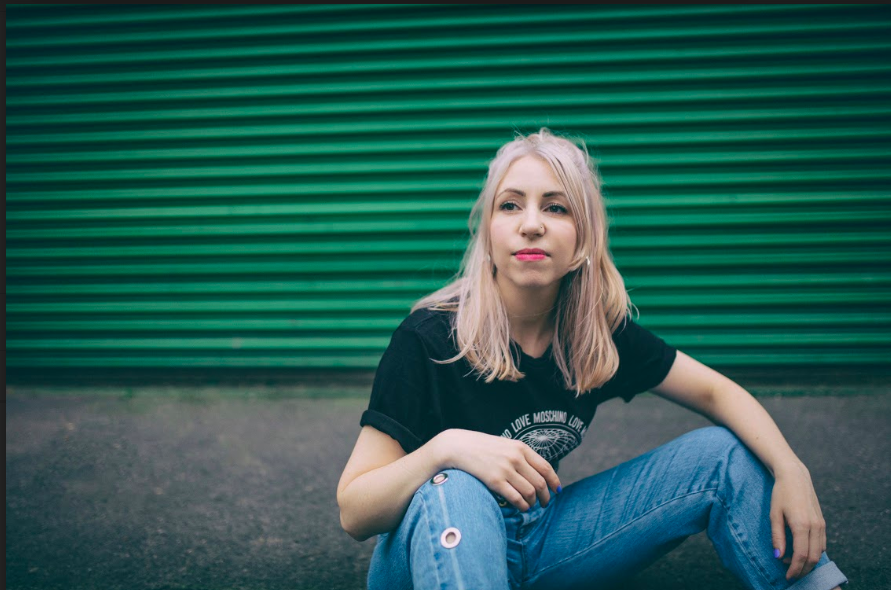 It’s weird how it’s all happened really. It’s all coincided where I’d already been making jungle and playing and collecting records. And in the last couple of years, there’s just been this explosion of new jungle and hardcore producers and labels and nights and newness. So, it just feels like it’s happened naturally, in a synchronistic kind of way.

I find it difficult to send people my music because I care about it so much and can be overly critical of my stuff, which is why I hadn’t done it before. It’s taken some time to put myself out there.

You’re definitely not alone, but we’re so glad you did it because your tunes are sick! I’d love to hear more about your tune Outta London coming out on AKO this year. I’ve heard DJs playing it everywhere. What’s the inspo?

Hearing people play my music on a big system is such a crazy feeling when you’ve grown up as a raver! I’m so grateful for the love and support the release has been getting. Flight & Mantra were the first DJs who played it out – they dropped a really rough version of Outta London at Rupture on International Woman’s day and it was such a buzz. The sample is from a 90s soundclash between Love Injection and David Rodigan. As soon as I heard it I was like YES. I wanted the tune to feel how jungle feels to me, it has all my favourite elements of a classic jungle track.

Did you just have it on your computer for quite a while before you sent it out to anyone?

Yeah, I had a rough version of the track for a while. Then at the first EQ50 meet-up for women in drum and bass, Mantra did a call out for producers to get feedback on their music. I sent them over to her and she called me, really buzzing about them and really feeling it. 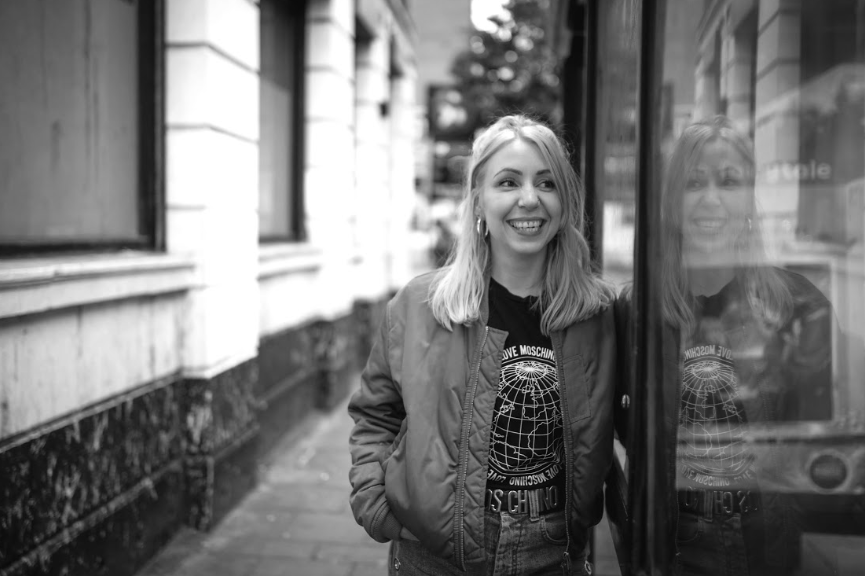 Is that how you got involved with Rupture and AKO, by sending your tracks over there?

Yeah! Sending those tunes over to Mantra at the EQ50 event kick-started me becoming visible. Mantra played my tunes to her partner (Rupture co-founder) Double 0 and they were really feeling them. They have both been amazingly supportive and encouraging with my music. She played my tunes to Stretch and he said he wanted to sign them straight away, which was mad, and that’s how I connected with AKO.

Mantra is a big inspiration to me. She’s become an awesome mentor, and now a friend. I feel very lucky to have connected with her and the other women who are part of EQ50.

Then she invited me to play as a guest on Sherelle’s Reprezent show, it was an EQ50 takeover with Chickaboo, Flight, G Magikal, Sweetpea and me. When Mantra heard me on the radio she said ‘you’re definitely a Rupture DJ! Would you like to come and play for us?’ Which was incredible. Stretch came to check out my set at Rupture and liked what he heard and asked me to play at AKO.

Wow, huge shout out to Mantra, EQ50 and Stretch then! I love that Mantra heard your tunes and immediately knew to send them to Stretch. Outta London is such an AKO tune.

Yeah, it fits with the label. AKO10s are the ones I love most in my heart and my soul. For me, to be on the AKO10 label is amazing, they’ve got that old school new school vibe. Massive shout outs to Stretch for all his support and belief in me.

I feel lucky to have connected with Indi [Mantra], Dubs and Stretch. They’re such good people. It’s so special what they’re doing with Rupture, AKO and the community around those nights and labels. That passion for the sound, driven by a real love.

It’s our soul tribe for real!! So on a side note, I’ve gotta say this, your fashion is always on point. You’re always reppin’ some serious Moschino and trainer swag… how would you describe your style?

Aw cheers mate! You always look so dope! I’m just living my London teenager rude girl fantasy hahaha. Cos when I was younger, the older girls in the raves had all the Moschino and I really wished I could wear that – but I was so young and had no money! But now I’m doing it, I’m living the Mosch dream haha. It’s just London… Fashion is a part of rave culture, whether you’re wearing Mosch, a tracksuit, or reppin’ your fave record label t-shirt. What I love about jungle raves is you can wear what the f*** you like and no-one really cares. Just do you. I always dress to dance, and to be comfortable. The 90’s fashion is really coming back now and I’m loving it. Oh, and I’m all about the air max 90s. They’re my favourite trainers. 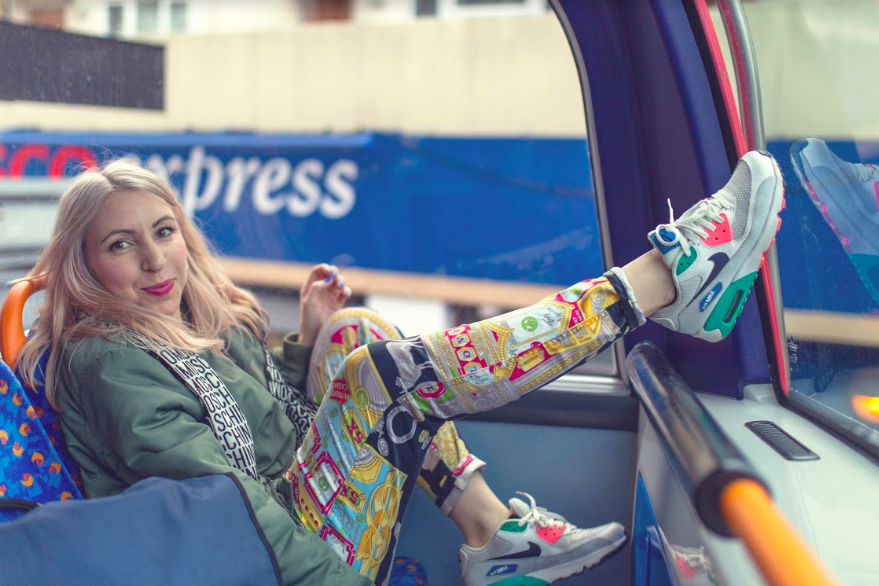 Haha that teenage dream is definitely relatable! What else is in the pipeline for 2020?

I’ve got the release dropping on AKO in Feb which is so exciting. Next couple of gigs are Brighton for AKO’s 25 years party, and Fabric for V Recordings at the end of Feb with the WMXB 2 collective – check them out they are doing amazing things! And I’m gonna be on the Rupture Rinse FM show in February too.

Damn, it’s gonna be an exciting year for you Decibella!!! We’re all so here for it…

You too babes, this Knowledge Mag/Rave Report collab is amazing. It’s gonna be brilliant following your journey too. I love that it’s 2020 as well. It’s all about THE 2020 VISION!