Ed Rush stops in for an exclusive interview with Kmag as he prepares to unleash his solo debut Scarabs on his long-rumoured Piranha Pool imprint. Is this the end of Ed Rush and Optical? Can we expect an Ed Rush solo LP soon? Read on for all the details…

This imprint seems to have come out of nowhere! Were you intentionally keeping it under wraps or was it a case of sitting on tunes that you knew you wanted to unleash on your own?
Yes, this imprint does seem to have come from nowhere but is actually something I’ve been planning in my mind for a while. Since I have moved into my new house I have been able to build a studio and being in a new room has inspired me to write a lot more music. I also had plans for this to happen a few months before now but various problems delayed the whole process.

I imagine over the years the thought of starting your own label has been in the back of your mind. Why now?
I think now is a great time to launch this new project as the style of drum and bass that I’m known for is very strong currently and there’s lots of new talent around needing exposure. Also I have written quite a few solo tunes recently so I think the timing for this is perfect.

What’s the significance/meaning of the name to you and how does this relate to your vision of the imprint and what kind of music it represents?
I decided to call it Piranha Pool about a year ago now after I heard the term mentioned in an interview on TV somewhere. I thought it was a pretty cool metaphor and it’s stuck with me. It obviously describes an environment that is very aggressive, hard to survive in and so I think it’s going to be perfectly suited to the sound that’s going to be represented by the label which is aggressive, upfront, futuristic-sounding music. 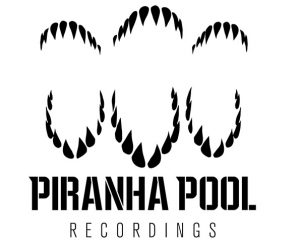 Apart from being your own venture, how do you see this imprint as establishing its own sound/vibe apart from Virus?
I think sonically Piranha Pool is going to be similar to Virus as that particular sound in drum and bass is what Optical and I have become known for over the years and I’m never going to stray too far away from that. The main difference is that in addition to providing a platform to release great music from established artists, Piranha Pool will also be able to nurture brand-new talent that I believe not only deserves to be heard but needs a home.

I know you and Optical have been touring a lot recently and I imagine this may have something to do with the birth of these two growling monsters on the first release? If not, where did the inspiration come from and does this mean you’ve caught the production bug again?
Yes, Optical and I have been on the road non-stop and we’ve had an amazing summer this year and we been lucky enough to play at some of the best festivals on the planet.

So, yes, the inspiration for ‘Scarabs’ and ‘Boxcar’ has in part come from such a heavy DJ schedule and wanting to have new tracks to play but it’s also the result of having a new space to work in. I found being in a new room very inspirational. It’s not that I ever lost the production bug it’s just taken a long time to get used to working in the box with no analog gear and now I feel like I’m finally getting better at it.

Give us a sense of how these two tunes came together – I know your full-length album with Optical is due soon on Virus as well, why the decision to release these separately from that project?
‘Scarabs’ came about because I just wanted a straight up banger to play in the clubs at the weekends and with ‘Boxcar’ I wanted more of a rolling vibe. I think it’s quite a good balance for a solid first release. The album with Optical is also coming soon, we are working on final mixes right now and we want that album to be more of a purist album on a ‘Wormhole’ vibe. At least, that was the original intention. So, with that in mind ‘Scarabs’ provided the perfect opportunity to launch this new imprint.

I know all the producer types out there are going to be wondering what kind of rig you’re running these days so give us a glimpse at the setup you have in the studio. Have you parted out the old hardware kit from back in the day or is it in storage somewhere?
The setup I’m running these days is totally in the box. We still have most of the old hardware kit and Optical has a few bits and pieces in his flat but here at my place I do everything in the computer. It’s something that I wanted to learn and to achieve so that you can (in theory) make music anywhere. I think with the use of good techniques and good plug-ins you can get very close to the analog sound and to the untrained ear you can’t really tell the difference. Still, I believe the best setup is probably a hybrid setup implementing the best of both worlds.

Any plans to get in the studio with other producers in the future? Anyone you haven’t worked with in all these years that you think you could produce some interesting results with?
Yes, there are plans to get in studio with other producers in the future and none of them people I have worked with in the past. I don’t want to mention any names in case I jinx the situation but suffice to say it could come up with some very interesting results.

The launch of a label is usually only the beginning – give us a sense of who and what else you’ve got lined up for future releases.
The next few releases on Piranha Pool are going to be more tracks from me like ‘Forever’ and ‘Brain Broker’, which some of you may have heard. There’s also some brand new stuff I am currently working on and some very exciting new talent that I believe will be making lots of noise in the future.

For all the Ed Rush superfans out there should we be holding out hope for a solo LP sometime in the next year? Personally, I’m holding out for a Piranha Pool tee-shirt so let us know when the merchandise is on the way ..

I’d love to make an Ed Rush album at some point next year. It’s something that I have thought about but with so much on my plate at the moment its food for thought for a later date. Re: the tee-shirt – I’ll let you know soon as they drop!