Making a difference in drum & bass is hard to do if you don’t want to be a producer. This is primarily because drum & bass already exists and lots of people are already well involved. You could go off and make a new scene, but then that wouldn’t be drum & bass, would it? So what do you do?

A brave yet neat answer to a problem that nags the brains of many a newcomer, is to take the gospel of drum & bass to somewhere new, and build a whole scene there. Voila, you’ve actually made a difference, put something in and had an influence on the wonderful culture that is d&b.

That’s pretty much exactly what Rohan from Bassbin did. Originally from England, Rohan moved to Ireland in 1994. And while a great deal of other people have been involved with bringing d&b to Ireland, Rohan is in many ways what Goldie is to Metalheadz or Chris Inperspective is to the edits sound. He’s the focal point, the lightning rod, the instigator, or so it seems.

Rohan himself shys away from such praise, but he admits he wanted to make a difference. “London can be quite anonymous; I lived there for seven years. But I went to college in Dublin and all my friends moved back there. They said the dance scene was about to start and if I went over there I could get my foot in. So that’s what I did. I have a background in event management, the festivals and I managed The Forum. But I just wanted to give it a go and do something for myself.”

That something was the establishing of a regular d&b club night, Bassbin: “I started Bassbin to get gigs for me and Naphta who has been resident since day one and a big influence in Bassbin and Don Rosco runs the night with me.”

He also started an Irish d&b label of the same name and recently a shop, called Selectah. No mean feat: these things are usually acts of faith and devotion, not normally vastly rewarding or profitable given the input of time, and rarely something that you get thanked for. So perhaps that explains Rohan’s polite discomfort about suggesting he’s made a difference in Ireland.

“Erm, well, without being big-headed… through the record shop and the club I’ve made an outlet for drum & bass in Ireland. I’ve not just put on a gig, taken the money, gone home and forgotten about it. I’ve lived d&b for the last nine years, it’s what I do. I’ve given an outlet for a lot of people to play records. I’ve given a lot of people their first gigs. I’ve given producers a home, a setup. I’ve given people speakers, mixing desks and let them use studios or whatever.” Believe us when we say that scenes need people like Rohan. Having 10,000 groundbreaking loops on a producer’s hard drive is one thing, building them into a scene is another. So allow us to give him some props.

Rohan’s also been able to affect the paths of certain producers, by well-timed precious gifts. “Polska. I gave him my sampler, he’s still got it. I gave him some monitors, just to get him up and running because his speakers weren’t good enough and you could hear it in his production. I lent him a desk as well.” If there are any struggling producers out there who haven’t had a tune out because their set up isn’t good enough and can’t afford a good set up because they haven’t had a tune out, you’ll know what a gift some kit can be.

Despite all the praise, it sounds like Rohan has a lot of fun along the way. He’s DJed in America twice, trips he’s arranged himself. And this autumn he’s going to play for Congo Natty and on the Valve sound system. But best of all he’s part of a scene in Ireland that’s currently flourishing, centred around the Bassbin club.

“Beta 2, Zero Tolerance, Naphta, Polska, Accident and Emergency – they’re all residents in the club and we’ve all hung out,” he explains. “There were 15 residents and I’ve tried to encourage them all to make music and have fun. I wanted to recreate the old Blue Note vibe in Dublin. I don’t think I ever have, but I’ve got a different twist on it. Basically Ireland is very white. Blue Note the energy was serious. It reminded me of the Two Tone vibe. People going to have a good time and a dance, and leaving all the politics outside the door.

“The era when we were having most fun was probably 2001-2002. Bassbin was the first weekly club. It was absolutely insane for two years. We had people like Marky, Fierce and Digital playing in this really hot sweaty club – very similar to the Blue Note in vibe. We brought over 4Hero, Doc Scott, Photek from 1996 onwards. Then we brought Ed Rush, Trace, Optical. The venue was a bit horrible when it was empty but when it was full of people it was crazy. The dancefloor was small-ish, so once you were between those four speakers it was heavy. ”

He’s also built up the Bassbin label, from its first release in 2000, up to a decent standard. As he points out, they’re a label who are expanding in a contracting market. Lots of the label’s success relates to the momentum generated by Breakage’s dub-bass-monster ‘So Vain’. They’ve since put out two tunes a month. Oddly for an old ska and reggae fan, Rohan is now tired of the 2004’s most ubiquitous influence:

“I’m sick of people sending me reggae tunes. I get them all the time. It can only be done by certain people: those that get it right every time are Digital, Calibre, Amit and Breakage. Others get it wrong. Looping up a reggae vocal and delaying it, that’s not what reggae’s about. You’ve got to get the bass right and use the samples properly.”

As drum & bass goes in cycles, it’s interesting to speculate what fashion is next. Knowledge’s money is on Underground Resistance style techno anthems, not a million miles from AI’s ‘Uprising’. “I think the old Blue Note Metalheadz style is going to come through,” says Rohan. (He would: he’s more than a bit enthralled by that mighty yet now almost a decade gone era). 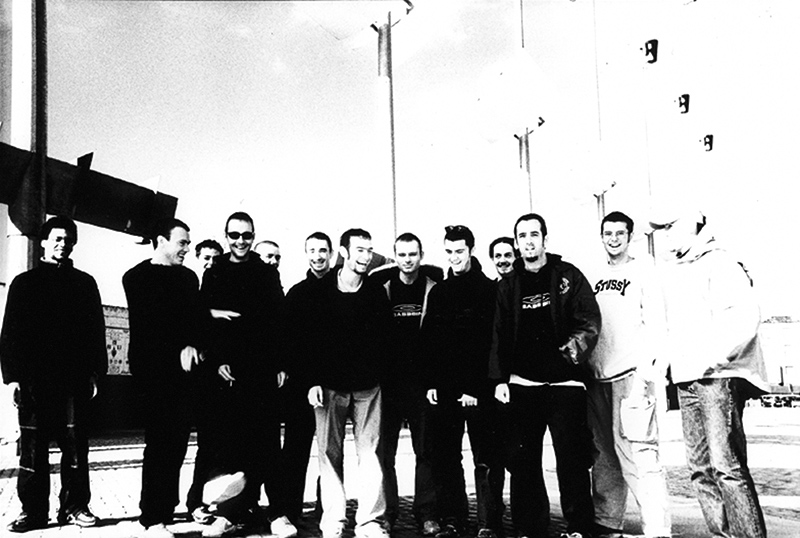 For now, Rohan is focusing on the first ever Bassbin compilation, due out at the end of January. It came about naturally, partly because he had a few amazing tracks from different artists (i.e. not enough for a 12″) and also because he wanted to expand the label’s sound and artist roster. The only people he’s not got on there but would love to work with are Goldie, Amit, Photek and Dillinja. “I don’t know if that will ever happen,” he says.

The best news is his old mate Calibre has given him an exclusive. “It’s a great track, called ‘Can’t Stop This Fire.’ Already people are like ‘giveusit!’ The samples in the track come from my record shop, so it’s a nice little touch, full circle. Whenever he comes to Dublin he always comes to my shop and buys loads of reggae, Detroit techno or different styles of music. He goes away and makes tunes and I’ll hear them. I’ll pick out certain records and say ‘use this…’ Two weeks later there’ll be a track that uses it.

“The first time I met Calibre I headbutted him twice by accident in a club when I was drunk. I just told him to come back and play for me. That was back in 1998. Since then he’s played with us four times a year. I’ve played up at his in Belfast, stayed at his house, y’know… Belfast is kinda, isolated, the scene is kinda small. I’ve kinda booked him more than anyone else in Ireland, so we’ve built up a good relationship through football, drink, reggae and drum & bass. Calibre’s Liverpool, I’m United.

“He also got me hooked on the ProEvolution game. It’s the drum & bass game in Ireland now, we all have little competitions around each other’s houses. We just all play it. Though whenever I turn it on, my girlfriend turns up. It’s quite weird. Who’s the best? I’m the best haha. The last time I played Calibre we drew. He’s one of the best, Zero Tolerance is probably one of the best too. Everyone’s at a fairly similar level, but I think I’m better than most of them at the moment. My girlfriend went away for six weeks so I got a lot of practice haha.”

Rohan takes us through his Kmag cover CD mix…

Skitty – Sweet Vibrations
“It’s got a DJ Die style bassline but with rolling beats and beautiful atmospherics. Nice chill tune. He’s a lad from Wolverhampton with tunes coming on Valve and Metalheadz.”

Random Movement – Struggle To The Grave
“Some guys that tracked me down from America. They posted on DOA and sent me the tune via AIM. It’s a deep, dubby roller. The bass is subtle but heavy at the same time. Only when you play it out do you feel it.”

Rohan & Basic Operations – My Brother
“I did this when I was in America. I brought the samples with me in case I had a few days off: I did. We did the tune in one day. It’s probably the tune I’m most happy with that I’ve done.”

Fracture & Neptune – Bless Me
“It’s a Funky Drummer deep dubby roller. It’s not edit-y, it’s the most rolling tune they’ve ever done. They did it specifically for me and they got the sound right for it.”

Breakage – Disco 45
“It’s Amen, slightly dubby with a dark Metalheadz kinda vibe. Goldie and Doc Scott play it at Metalheadz all the time. It took me a year and a half to get it out of Breakage.”

Seba & Paradox – Sound on Sound
“I only signed this two weeks ago. It’s ’95-96 Metalheadz Blue Note style, it’s deep, dark without being nasty or noisy.”

Paradox – Bongolia
“We asked him to do an Apache track. It’s like Paradox-meets-Dillinja. Mental edits on the Apache with Dillinja style bass. It was Naphta’s idea to get him to use Apache because Paradox had never done one. He used parts that hadn’t been used before from the same recording session.”

Breakage – So Mars
“This is out soon, it’s the remix of ‘So Vain’ and ‘Mars’ put together. The bass on that is even heavier than ‘So Vain.’ It is. Trust me.”

Seba & Paradox – Frost
“It’s heavy, seriously heavy. They rang me and asked me if I wanted them and I was shocked that they came to me.”

Breakage – Ask Me
“This is coming out in February next year. Another Amen, another reggae sample but this one’s lovely, it’s different. It makes the girls dance.”

Calibre – Can’t Stop This Fire
“He got the samples from my shop. It’s probably the happiest tune I’ve ever put out. It makes me kinda smile, makes me laugh but it’s very catchy. I’m delighted he gave it to us.”