Trending
You are at:Home»Features»Dexta: Celebrating 10 Years of Diffrent Music
By Rave Report on April 12, 2020 Features

Diffrent Music has been going against the grain of UK bass for 10 years strong. To celebrate the label’s anniversary, I picked the creative brain of legendary co-founder and record store co-owner (Chris) Dexta. We reflected on the evolution of the Diffrent ethos, sound and aesthetic. The ways he’s brought so much unsigned talent into one big family; and what you can expect next from the label that will always be Diffrent by name, Diffrent by nature!

Eazy Chris, congrats on 10 years of Diffrent! In your words, how would you describe the label’s ethos today?

Big up! For me, it’s putting out music I really enjoy that doesn’t fit any mould in particular. If there are 10 different artists, I don’t want them all to sound the same. If you listen to BrandNewTrumpets, Lakeway, Fearful and me, there are common threads but you wouldn’t necessarily put us in the same DJ set. By the nature of it, we’re experimental in our music; we’re not trying to recreate Dillinja records from 1996. We’re all taking inspiration from music we like from outside our own little worlds.

Do you think that ethos has remained the same over 10 years of Diffrent Music?

Maybe it’s expanded. Before, our sound was more stripped back, minimal drum & bass. We popped up around the same time as that was all taking off, and we got bundled in with that. But we’re not just minimal… we’re also maximal! Haha.

What’s been the biggest change since 2010?

We’re trying to go more in the direction of artist-led rather than label led. I’d like to think of us as a mini modern-day Ninja Tune in a sense. I don’t mean the style of music. Ninja Tune is more artist based, and many of their artists have different audiences. They probably have about 20 or more signed artists, each with their own campaigns and concepts. Originally we were label led and we made a bit of a name for ourselves, but now it’s time to bring it to the next level. We want to get our artists to the same level as our label.

Can you give us an insight into your creative thought process?

I’m an Aries yeah, so when I get something into my mind I don’t really think about it too much. I go with my gut instinct. A lot of it comes from me waking up one day and saying let’s do this and that, literally off the cuff. There’s no pattern!

That’s something I rate about you, you’ve always managed so many projects!

Mate, Disc World and 1800 Dubplate was the same, it was like… Boom. Idea. How do I make it happen? And just try it. Some projects will succeed, some won’t. That’s part of who I am. There’s not really a plan but it’s from the heart. And it all feels like a labour of love, I haven’t made much money from it. 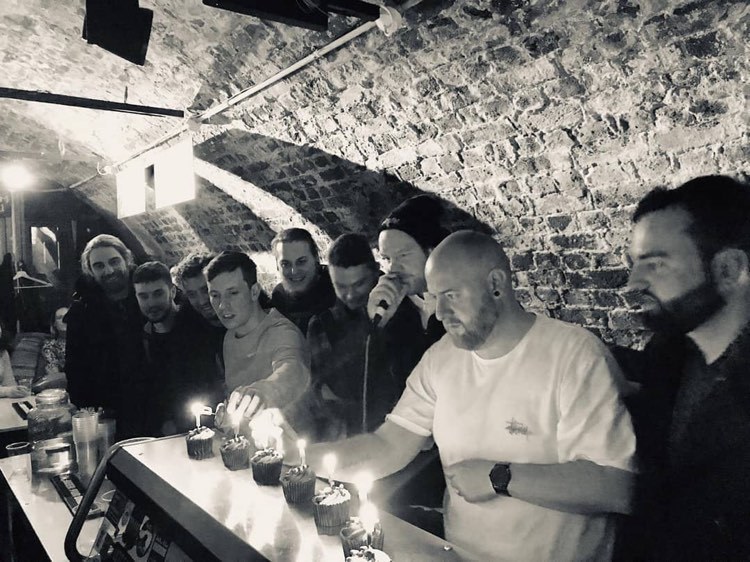 But a huge list of accomplishments! One thing I’d like to hear more about is the platforms you’ve provided for unsigned talent. Were they all artists you’ve headhunted?

No, they contacted me! Well, that’s a lie, I met BrandNewTrumpets at a funeral. I knew her husband (Mr. Porter). And he was like ‘have you heard my missus’s music?’, sent me her tunes and I just fell in love with the sound. Fearful and Mauoq sent me demos and I was like yes! Crypticz did a bootleg of a tune I liked, which I heard at a Diffrent music event so I tracked him down. After that, Crypticz did a collaboration with Lakeway that I released. That sent me on his trail, so I hit him up and the rest is history…

Something else I love about Diffrent is that the label is very visual. How has your experience as a graphic designer at DJ Mag and Hospital Records helped?

Working at DJ Mag I learnt a lot of skills. I’ve always had good ideas but wasn’t always able to utilise them. Big shouts to my man Martin Brown, Creative Director at DJ Mag, who hired me even though I didn’t have any experience but liked what I’d done in the past. He taught me the rest!

At Hospital Records I was label manager of Med School amongst many other roles. But I was also the in-house design guy for a while too, where I designed a bit of everything. When I first started I did the merchandise, most of the event flyers, web assets etc., it’s all brought skills back to me personally and for my brands. So yeah – defo some vital experience in there! 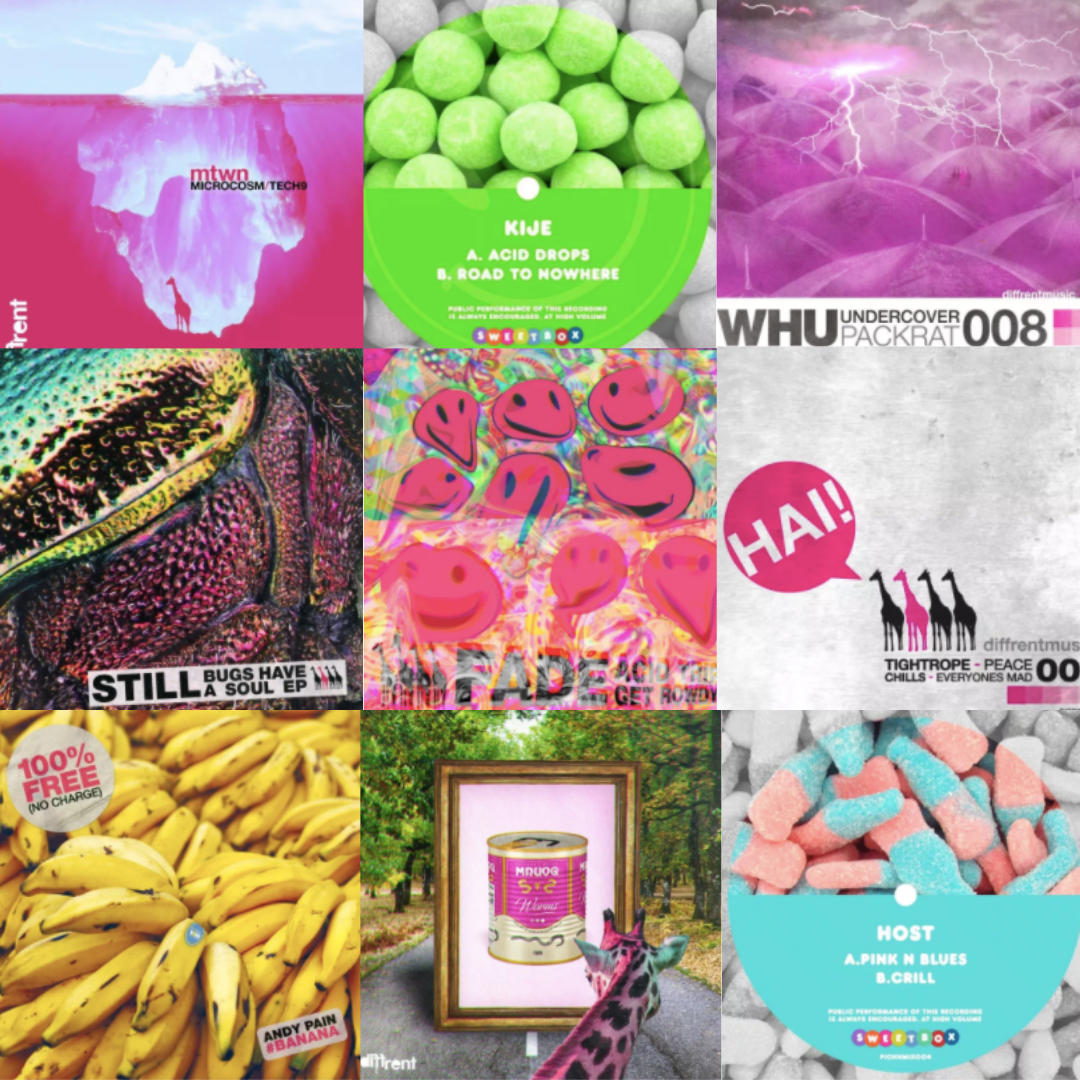 You’ve created so many mini brands for your artists and sister labels, and it comes together in such a vibrant combination of textures and colours. It really reflects the Diffrent ethos.

I’m glad you think so, but I don’t think it’s as coherent as I’d like it to be. Everyone’s got their own opinion. At HQ there’s a desire for everything to fit the BrandNewTrumpets artwork style. But personally I think that’s her thing, you can’t have it haha!

I learnt that from when I was working at Hospital Records. One of the artists I was working with was Unglued. The idea was to have all his artwork done in a particular glue brand’s style. Everything Unglued based is gonna have the same font, same colour palette – it’s a brilliant branding strategy! That project really taught me you need to have mini brands.

How are you going to manage Diffrent Music on top of all your other projects, like Disc World Record Store and Clashmouth Record fair?

I’ve been working with the new team for about a year. I’m the creative / A&R guy, Ben Hindle does promo, James Hillyard looks after digital and Rob Vanden manages the label and makes sure everything gets done. Since December with DiscWorld I told the guys I need to take a bit of a back seat. I’ve tried to hand over the best I could – they’re coping very well, and there’s a lot happening behind the scenes.

What stuff have you guys got in the pipeline?

We’ve got at least 10 releases lined up! BrandNewTrumpets, Lakeway, Fearful, Constrict, Mani Festo, Dusty Ohmss. 5 of which are on Sweetbox. There’s the recent sister label ‘Are We Really Alone’, it’s a weird, distorted, horrible bastard child freakazoid! Matter of fact, my latest release (Cyclops / S30) came out on there! The world is in trouble haha.

You lot are grafting hard. Big up! To round it off, Kmag announced your label back in 2010, and released a launch mix with you and Sense MC. How does it feel being back celebrating 10 years of Diffrent Music?

I don’t know how they even knew about us in 2010 – hats off to Colin and the team! That mix took me ages to make, it’s all in the precision. Remember the CDs that were on the cover of the mag? I treated it like it was one! Oh yeah, we’re dropping that mix as the start of our new tape series – should be available to order now on our website!

They were a massive support to us in the early days and owe a lot of credit to the team – wow, they even threw a party for us, at Cafe 1001, Brick Lane, and we did a video interview. I’m featured in the 25 years of Knowledge book too, so I feel like I’m part of the family. Yeah, big up Kmag!!!

Salute to you Chris and all the family! Here’s to another 10 years of Diffrent Music.